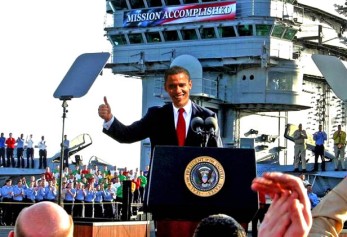 President Obama wants to declare victory in the war on terror:

I intend to engage Congress about the existing Authorization to Use Military Force, or AUMF, to determine how we can continue to fight terrorism without keeping America on a perpetual wartime footing.

The AUMF is now nearly 12 years old. The Afghan war is coming to an end. Core al Qaeda is a shell of its former self. Groups like AQAP must be dealt with, but in the years to come, not every collection of thugs that labels themselves al Qaeda will pose a credible threat to the United States. . .

So I look forward to engaging Congress and the American people in efforts to refine, and ultimately repeal, the AUMF’s mandate.

Although it’s hardly an original observation, Obama is right that we don’t want to be on a war footing forever. But aspirations are not realities.

After years of relative quiet, terror is on the rise again. There was the Benghazi attack last September, the Boston bombing last month, and a machete attack in London the very same day as Obama’s speech.

If Obama wants to end the war on terror, he should win it, not just declare it over. More on Obama’s folly here.

FOOTNOTE: I’m not sure the original source of the Obama Photoshop; I got it from here.

This entry was posted on Friday, May 24th, 2013 at 12:01 pm and is filed under Military, Political. You can follow any responses to this entry through the RSS 2.0 feed. You can leave a response, or trackback from your own site.