1984 was not intended as an instruction manual

Unfortunately, we now live in a world in which you cannot trust the dictionary. For some time the Merriam-Webster dictionary has been giving alarming signs of increasing wokeness in its snarky social-media profile (case in point), but yesterday they took a significant new step toward Newspeak.

In her confirmation hearing, Amy Coney Barrett referred to “sexual preference” (not discriminating on the basis of), and we learned that the term is now forbidden. The politically correct term, we are told is “sexual orientation.” Many people who had not been tracking the politically-correct lexicon day-by-day were unaware of the change:

(Video by the Washington Free Beacon.)

Within the day, there was unanimity on the left about how offensive the term was. Politicians were lecturing Judge Barrett about it.

Enter the dictionary. Merriam-Webster’s dictionary had “sexual preference” as one sense of the word “preference”.

That put it out of step with Democrat messaging, so they changed the definition to:

It seems extremely unlikely to be coincidence. In any case, they have not denied it. Nor indeed, have they made any comment on the controversy at all.

So we now live in a world in which the publishers of the dictionary give same-day service editing its definitions to fit the Democrat narrative. This is right out of 1984.

POSTSCRIPT: Merriam-Webster’s word of the day yesterday was an ironic choice, given what they had just done:

132. 'Corruptionist' – one who practices or defends corruption especially in politics https://t.co/sd0hM9j7tR

Vote for the jerk; it’s important

I was “never Trump” in 2016. Trump seemed to know hardly anything, least of all what it means to be a conservative. As Brit Hume put it, he put less preparation into running for president than most people put into buying a sofa. The things he said sounded very much like a bizarre liberal parody of conservatism, as if he learned what it means to be a conservative from reading the New York Times. (I still suspect this is the truth.)

I was convinced that if he won, he would be a national embarrassment and do a terrible job. I was half right. My aim here is to discuss Trump’s record issue-by-issue, and make the case that he deserves re-election.

Character: We’ll start with the bad one. Yes, he is a boor and a national embarrassment. The tweets are awful. I cringe every time he opens his mouth. His personal conduct is deplorable. It is true that Joe Biden is also a bad guy (indeed, the only decent human among the four candidates is Mike Pence), but probably not to the same degree. In any case, Biden at least pretends, while Trump seems to relish his outrageous behavior. Nevertheless, this is just one issue, and there are much weightier matters at stake.

The courts: He has appointed great judges who respect the Constitution, and they have been sorely needed. I doubt that he has had much involvement in the process, but who cares? Biden, if elected, will attempt to stack the Supreme Court, not only putting progressive activists onto the court, but destroying the respectability of the court as an institution.

ISIS: It’s easy to forget this since it was so early in his administration. Under Obama’s neglect, ISIS grew for years. At its worst, it was striking targets in the US. On coming into office, Trump destroyed ISIS in a matter of months, with zero US casualties.

The economy: Before covid lockdowns brought the economy to its knees, we had arguably the strongest economy in US history. We had indisputably the best economy for minorities in US history. Deregulation and tax reform had a lot to do with that. When we finally get to rebuild our economy post-covid, they will work again.

Covid: Yes, there were missteps. But Trump got the two most important things right. First, he focused on getting a vaccine developed and deployed, quickly and safely. We will see if he succeeded soon, but indications are good. (Alas, hopes that a vaccine might be ready before the election were recently dashed by a politically motivated rule change by the FDA to slow emergency authorizations.) Second, and more importantly, he kept the federal government in its lane. Under our Constitution, it’s the states’ role to take the lead, and the federal governments role to assist. It’s extremely clear that any Democrat (and probably most Republicans) would have jumped at the opportunity to seize power that does not belong to the federal government. Indeed, Joe Biden promises to do exactly that on his first day in office. Some day covid will be a painful memory, but the powers seized today will never be relinquished.

Much has been made of how Trump “downplayed” the virus, but he wasn’t wrong to keep covid in perspective: 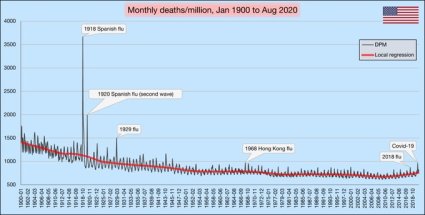 Law and order: Trump has taken steps, within the limits imposed by our federal system, to restore order to our cities. On the other hand, Democrats have sought to extend the riots. They have consistently dropped charges against rioters arrested by the police. Kamala Harris personally raised money to bail rioters out jail. They have tied the hands of police, and in some cases have even sought to defund the police. With their allies in the press, they have pushed the absurd narrative that the riots are “mostly peaceful.” As a result, crime is soaring.

Biden has been unable to condemn any of this with any clarity. He says that Antifa is “just an idea.” And he has made remarks that seem to support redirecting police funding to social services, although the media has made great efforts to clean up the remarks.

Embassy in Israel: Bill Clinton and George W. Bush promised to move our embassy in Israel to Jerusalem, but they both broke that promise. Since 1995, presidents have been signing a waiver every six months delaying the legally required embassy move. Trump finally kept the promise. The foreign policy elite predicted that doing so would result in widespread violence from the “Arab street.” In fact, quite the opposite happened.

The Abraham Accords: The treaty normalizing relations between Israel and the UAE and Bahrain is the first real step toward middle east peace in many years. The importance is not so much the agreement itself, since there was already peace between Israel and the UAE and Bahrain, but the signal it sends that the other Arab nations are no longer willing to put up with the nonsense of the factions ruling the Palestinians. If the Palestinians continue their intransigence, the other Arabs will go ahead without them and they will be isolated.

Of course, the UAE and Bahrain are not big players. The real promise is Saudi Arabia. The Saudis haven’t joined yet, but Bahrain (closely aligned with Saudi Arabia) joining is a signal that the Saudis are considering it. The Saudis agreeing to allow overflights is another important sign. And the public statements of Prince Bandar are yet another. If Trump is re-elected, there is a good chance the Saudis will join. But the Democrats don’t support the Accords. If Biden is elected, I doubt he will actually repudiate the Accords, but they will be dead as an agenda. No energy will be put into extending them.

Due process: In April 2011, the Obama administration issued its infamous “dear colleague” letter, which ordered colleges to deny due process to any students accused of sexual assault. The Obama administration bypassed the usual process of regulatory rule-making, and was unable to give any convincing legal justification for its order. Most colleges complied anyway, and for years students were denied due process. Horror stories abound. Fixing the problem has been one of Education Secretary Betsy DeVos’s priorities. Moreover, she fixed it properly, going through the normal rule-making process. Unfortunately, that takes time and they way the timing has worked out, a Biden administration might be able to reverse the process, returning us to kangaroo courts in which accused students are unable to defend themselves, or even be told what they are accused of.

Iran: Weakness invites aggression. Iran violated international law when it captured 10 Navy sailors who had wandered into Iranian waters due to a navigational error, and its outrageous, illegal treatment of those sailor upon capturing them was even worse. The Obama administration meekly thanked Iran for treating our sailors well (!). In negotiating his nuclear deal with Iran, Obama made it clear from the outset that he had to have a deal, no matter what, and Iran responded in exactly the manner one would expect. Obama got his deal, an unenforceable promise not to develop nuclear weapons for a while, and in exchange we were taken to the cleaners. In addition to accepting the abduction of our sailors, Obama spiked an investigation into Hezbollah trafficking drugs into Europe and the United States, lifted sanctions on Iran, allowed Iran to import sensitive equipment, and, most astonishingly, shipped Iran almost $2 billion in cash. (The claims that we owed them the money are untrue. Indeed, the payment was illegal: a law signed in 2000 by Bill Clinton prohibited it.)

Much of the damage could not be undone; certainly Trump could not claw back the money. But Trump has stopped presenting weakness, and has begun the process of reestablishing sanctions. Trump approved the killing of Iran’s terror mastermind Qasem Soleimani, who had boldly crossed the border into Iraq to organize attacks against our allies. The Democrats flipped out at this, saying that it would certainly lead to war. Of course, nothing like that happened. On the contrary, with an indispensable terror leader removed, things have been much quieter. Trump has also offered moral support for Iranian dissidents, which Obama pointedly refused to do.

Huawei: The Trump administration led the effort to have Chinese chips banned from use in 5G networks because of security concerns. That effort has been successful with several of our closest allies, including the UK, Australia, and Japan.

The environment: Trump will not ban fracking or push the “green new deal”, both of which Biden and Harris have both pledged to do. Fracking has finally made us energy independent, and in fact has helped the environment greatly, by making it possible to move industry from coal to natural gas. The “green new deal” is communism painted green. It would be an utter catastrophe to everyone except the nomenklatura that it would empower.

Donald Trump is not senile. Joe Biden is.

Please tell me about the norms

Fun fact: The very first time the newly formed Democratic Party received a Supreme Court nomination, in 1828, they refused to vote on it, so that Andrew Jackson could make an appointment the following year.

Another fun fact: The very first time a Democratic president had a Supreme Court vacancy in the final year of his term, in 1841, the Democratic Senate confirmed the appointment. They confirmed the nomination four days after it was made, on the second-to-last day of the lame-duck session that took place after they lost the election.