He is referring to an incident at a recent Republican debate where the audience booed a gay soldier who asked a question about homosexuals in the military. Except it never happened, not as it has been reported. “The audience” did not boo; two members of the audience booed. (For all we know, they were provocateurs.)

Obama apologists will reply that Obama never committed himself to the number of boo-ers, so he wasn’t lying. I’ll grant you, it’s a clever use of the passive voice: he’s alluding to the lie without actually repeating it himself. That makes the statement technically accurate, but it doesn’t make it honest.

But let’s suppose Obama really meant it literally. Let’s suppose he really meant that one has a duty to stand for the military, no matter how marginal the attackers, “even when it’s not politically convenient.” Then he must have spoken up forcefully for General Petraeus when MoveOn.org came out with this: 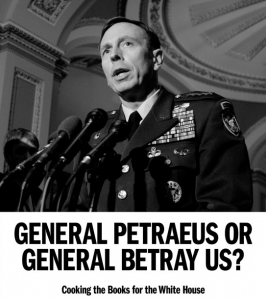 But, of course, he didn’t. In fact, when the Senate passed a resolution 72-25 condemning the ad, Barack Obama declined to vote, despite having been on the Senate floor just minutes earlier. He was running for the Democratic nomination for President, and it wasn’t “politically convenient.” (One other senator didn’t vote: Joe Biden.)

He also sat quietly for years as Jeremiah Wright thundered his bigotry from the pulpit of his church in Chicago. For example, he remained silent when Wright gave this rant, blaming 9/11 on the actions of our bloodthirsty military. Obama, then an Illinois state senator, had ambitions for national office and he needed the support of people like the members of that church. It wasn’t “politically convenient” to speak out.

This entry was posted on Monday, October 3rd, 2011 at 8:25 am and is filed under Political. You can follow any responses to this entry through the RSS 2.0 feed. You can leave a response, or trackback from your own site.