A wild one in Wisconsin

I was just getting ready to write some comments on Tuesday’s supreme court election in Wisconsin, when the result was turned upside down.

I noticed Wednesday morning that Prosser (the Republican) had not picked up as many votes from Waukesha County as I expected. But my estimate was a highly unscientific, back-of-the-envelope calculation, so I didn’t think much of it. Ann Althouse noticed the same thing (and, unlike me, she actually blogged it):

Waukesha is now shown as completely in, but the numbers didn’t change, so I think something may have been misreported. I took the trouble to do a calculation and was going to predict that Prosser would net 40,000 more votes in Waukesha. What happened?

Well, it turns out that something did happen. The Waukesha County clerk failed to record the votes from one city. (She failed to save the database after importing the data.) When the error was discovered during canvassing, Prosser gained 7,582 net votes, demolishing his razor-thin 204-vote deficit.

This is not a case of extra votes, or extra ballots, being found. This is human error, which I apologize for. . . Which is why the state requires us to conduct a canvass.

Prosser’s new lead is outside the margin that requires an automatic recount, but I suspect we will see a recount nevertheless. I won’t go out on a limb and say that this thing is over, but I think Prosser’s campaign has to be pretty happy with their position.

Democrats and union bosses had been crowing about the Prosser’s apparent defeat as a rebuke to Scott Walker, the Republican governor, and indeed to Republicans nationwide. (This was already foolish, given the narrowness of the margin despite the huge union effort for Kloppenburg, Prosser’s opponent.) Now, well, Mary Katharine Ham puts it best:

ASIDE: If you want more schadenfreude, watch this video in which Kloppenburg brushes off the question of whether she should be claiming victory with such a narrow margin.

Now, although the tone will be quite a bit different than it might have been, I still need to remark on why it was so important that Kloppenburg lose this race (and therefore that Prosser win). This photo, taken by Ann Althouse, tells the whole story: 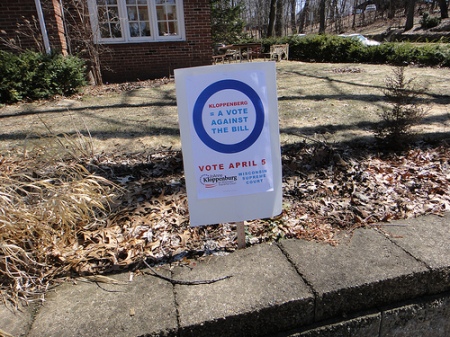 Kloppenburg was campaigning on a promise to overturn Wisconsin’s budget repair bill that was fiercely opposed by public-sector unions. This is absolutely not what a court is supposed to be doing. Under the rule of law, a court is supposed to rule on the law, not pursue a political outcome. Of course, this rule is frequently violated, especially by the left’s judicial activists, but always they at least pretend to take a proper judicial view.

That pretense is valuable. While I would prefer their counterfeit judicial temperament to be real instead, their need to pretend does limit how far they can go in carrying out their political aims. When judicial candidates can come out and promise to rule a particular way in particular controversies, the courts will have become just another political body. We don’t need a third branch of the legislature. We need the rule of law.

Mickey Kaus put it this way, when we all thought Kloppenburg had probably won:

There is also the minor issue of whether opponents of the anti-union law have a case. Or does everyone agree that doesn’t matter anymore?

Fortunately, it looks like that still does matter. For now.

UPDATE: The vice-chair of the Waukesha Democratic Party stands by the new totals.

UPDATE: Apparently Prosser had already taken a narrow lead in canvassing before the Waukesha correction.

This entry was posted on Thursday, April 7th, 2011 at 11:44 pm and is filed under Legal, Political. You can follow any responses to this entry through the RSS 2.0 feed. You can leave a response, or trackback from your own site.